Employers face pressure to take action against employees for non-work activities. But, as Amy Cooper’s recent lawsuit illustrates, doing so is not without risk.

Social media is prompting some firms to announce employee terminations in response to a social media storm. But it’s not without risk, as a lawsuit stemming from a confrontation between a dog walker and a birdwatcher in New York’s Central Park proves.

This week, Amy Cooper, the dog walker, filed a lawsuit against her former employer, Franklin Templeton. The lawsuit includes claims of gender and race discrimination as well as defamation.

Last May in Central Park, birdwatcher Chris Cooper (no relation) reportedly asked that Amy Cooper leash her dog, recording the encounter in a video that quickly went viral. During the encounter, Amy Cooper calls the police and explains that there is an “African American” who is “recording me and threatening me and my dog,” while the portion of the confrontation made public shows otherwise.

The lawsuit states in part that, “This confrontation became international news as a racial flashpoint, characterized as a privileged white female ‘Karen’ caught on video verbally abusing an African American male with no possible reason other than the color of his skin.” But the lawsuit also argues that the characterization was nurtured by her employer’s statements.

The lawsuit alleges that Franklin Templeton didn’t investigate the incident. It said that Amy Cooper’s response to Chris Cooper was “because she was alone in the park and frightened to death.”

The risk of going public

The lawsuit “really does point to the risks of going public with a firing,” said David Kurtz, an employment attorney at Constangy, Brooks, Smith & Prophete LLP in Boston. He believes that the defamation claim may have some teeth to it.

An employer could have said that it had completed an investigation and “while we do not comment publicly on employment matters,” it is announcing that the employee is no longer with the company, which could have meant a resignation or termination, Kurtz said.

Instead, Franklin Templeton “told the whole world why she was terminated,” Kurtz said. That opened the door for Amy Cooper “to try to challenge that reasoning, which has obviously had a major impact on her life.”

In response to the lawsuit, Franklin Templeton said in a statement: “We believe the circumstances of the situation speak for themselves and that the Company responded appropriately. We will defend against these baseless claims.”

Social media puts employers under pressure to take action against employees for non-work activities, such as what happened in Central Park. At the Jan. 6 Capitol attack, social media users, for instance, linked protestors to employers — one participant wore his employee badge — and demanded their employers take action.

Employers have “to be a little more contemplative” before making any definitive statement about an employee, said Mark Kluger, employment attorney and founding partner at Kluger Healey LLC, a law firm in New Jersey. “From a human resources standpoint, Franklin Templeton probably jumped the gun a bit,” he said.

But the pressure on employers to go public is growing, from the #MeToo movement to social protests, Kluger said.

Generally, employers are trying to stay ahead of social media firestorms, especially with high-level employees, and not be labeled as misogynistic workplaces or fail to take an allegation seriously enough, Kluger said. “Employers began to do these terminations and not just do them, but publicize them,” he said.

Author: Patrick Thibodeau covers HCM and ERP technologies. He’s worked for more than two decades as an enterprise IT reporter. 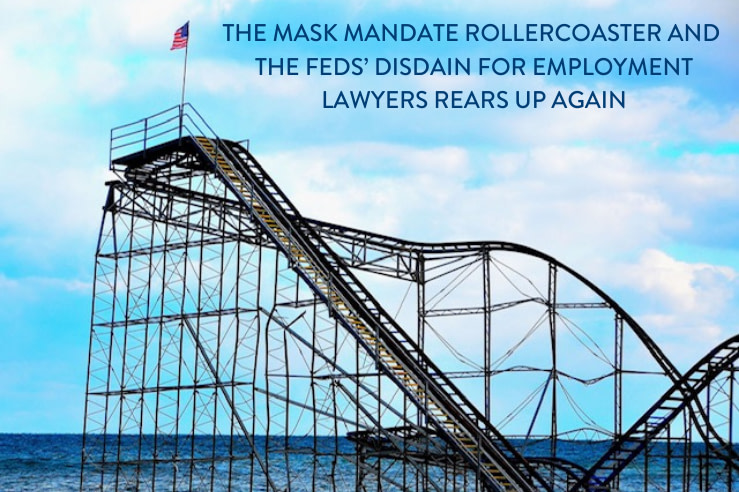 What’s with the feds continuing to use this pandemic nonsense to mess up our Memorial Day weekends–2 years in a row? On Friday May 28, the EEOC issued new guidance on employers mandating the vaccine and other related things. The most important part of this new guidance is that it’s definitive proof that we were right last year when we whined theorized that the feds must despise employment lawyers because the Treasury Department released its thousandth 14th set of PPP interim regs on the Friday of Memorial Day weekend 2020, ensuring indoor activities for us back then too. You know they’re just holding this stuff so they can release it in time to ruin all our fun—to the extent we have any. At least it rained last weekend, so feds, who got the last laugh this time?

This delightful turn of events followed a week of flip-flopping Executive Orders on masking in NJ that made us feel like we were riding the Jersey Devil rollercoaster. That insanity really started on May 13, when CDC issued guidance indicating that outdoor masking was no longer necessary and that fully vaccinated employees could be mask-free in indoor work spaces. Most states jumped on board, but not Murph, he hung back and on May 17, issued an EO saying that for indoor workplaces like offices, warehouses and factories not opened to the public, everyone needed to remain masked even if vaccinated. Not long after we broke that news to you, we got another plot twist (we thrive on employment law plot twists).  On May 26, Murph changed course again and got in line with CDC and added his own flair, by issuing Executive Order 243.

So now, effective June 2, 2021, if you permit it, all fully vaccinated NJ employees can be mask free in public and non-public indoor workspaces (with some exceptions like healthcare facilities) and no longer need to stay 6 feet from their friends. But, unvaccinated workers must remain masked and 6 feet from the rest of the world, except when at their distanced workstations or in their own offices. Here’s the Murphy bonus though: unmasking is only permitted where the employee provides proof that they are fully vaccinated. Just to be clear, the EO adds that: Wherean employer is unable to determine the individual’s vaccination status or the individual is not fully vaccinated, employers must continue to require those employees to wear masks and practice social distancing. So if the employee is unvaccinated or refuses to show you proof of vaccination because they think they have some privacy rights (we’ll put an end to that myth in a minute), then you must continue to insist that only their eyes are visible at work for the foreseeable future. The irony, of course, is that as soon as they leave work they can go to the mall or ride the Jersey Devil and show everyone their full, unadorned mug. Life in Jersey!

The feds ruining yet another Memorial Day for us was so newsworthy that one of us was even interviewed about it for some news networks. The interview also briefly touched on the substance of the EEOC’s new 11 pages of guidance clarifying and updating its December 2020 FAQs. The bottom line remains the same: employers can require all employees who enter the workplace to be vaccinated unless they have a valid medical excuse (protected by the ADA) or a sincerely held religious belief (protected by Title VII of the Civil Rights Act). Of course, they say it in typical government speak. Instead of “employers can require employees to be vaccinated” they say: The federal EEO laws do not prevent an employer from requiring all employees physically entering the workplace to be vaccinated…subject to …reasonable accommodation…unless providing an accommodation would pose and undue hardship on the operation of the employer’s business. Either way, you get the gist.

So when Bob from Accounting says he can’t get vaccinated because he passes out at the sight of needles and really sharp pencils, you must engage in an interactive process with him by asking about how you might be able to accommodate his disability, which can include requiring information from his doctor. We suggest a simple accommodation: just wait til he passes out and give him the darn shot. If the Doc won’t go for that, the EEOC suggests accommodations that might include requiring Bob to wear a mask and social distance (novel ideas) or work off hours, get periodic COVID tests, remote work or reassignment. If none of these accommodations will work and you determine that an unvaccinated Bob poses a direct threat to himself or others that cannot be eliminated by accommodation, you might be able to safely end Bob’s employment (but not without risk of a lawsuit). The new guidance dives deeply into direct threat assessment. We’ll spare you the details, as that’s what you have us for. Most likely there are enough options available to work it out (accommodate) if an employee can’t get vaxed.

Among our most frequently asked questions last week was whether employers can require proof of vaccination. Some employees have the mistaken impression that employers cannot. The EEOC has now made it crystal clear that you can do so, but again backing into it with: Although the EEO laws themselves do not prevent and employer from requiring employees to bring in documentation or other confirmation of vaccination, this information…must be kept confidential and stored separately from the employee’s personnel files… That means, yes you can require proof—but it must be kept with the employee’s other medical docs. Simple enough! And in NJ, remember, if you allow the vaccinated to be maskless, you must require proof. EO 243 says so.

Meanwhile, outside our Northeast bubble, 117 hospital workers have sued their employer over its June 7 deadline for all employees to be vaccinated or risk suspension or termination. Although 99% of the system’s 26,000 employees got the jab, the holdouts claim it’s illegal to require employees to get an experimental vaccine as a condition of employment. The lawsuit claims that the employer mandate violates the Nuremberg Code, a research ethics code which prohibits forced experimentation on humans that resulted from the Nuremberg trials. Although we’re not experts on that code, it’s our guess that the vax being a job requirement is not forced experimentation, it’s just a condition of employment at that one hospital. There are lots of other hospitals that will no doubt allow the 117 employees to work without the shot. Just sayin.