The Morning After: Employers Lose the Super Bowl Again 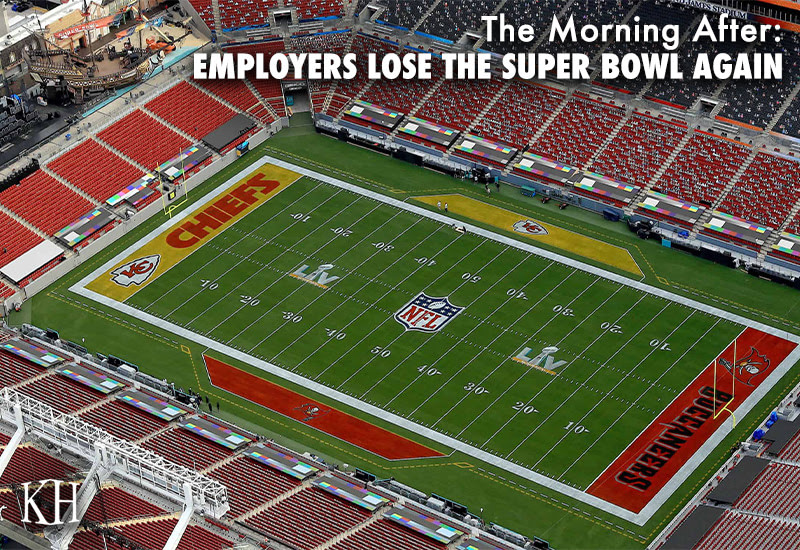 Got that morning after, post-game hangover? Those two beers do you in or was it the heartburn from the Hell Fire Buffalo Wings? Maybe like us, you’re just getting too old to party like it’s 1977 (the year Tom Brady was born). More likely though, your COVID-Bowl party was a bit smaller, this year, if not more tame. This year’s big game featured Patrick Mahomes, who has been described as “a once in a generation player,” in a showdown with the Ancient Mariner, Tom Brady from a completely different generation. Some people see it as just about football, but to us, the battle was between generations—Brady representing his largely non-descript Gen-X and Mahomes the ever-present Millennials. So maybe Mahomes is really a once in two generations player. Either way, the event was as monumental as Billie Jean King against Bobby Riggs, or Muhammad Ali against Sonny Liston (Google ‘em if you’re too young for those references).

The fact is that Brady couldn’t have lost no matter what the final score; he won just by getting there at his age and with a team that most believe wouldn’t have made it without him. Just as we have harangued you with in the past, the only clear losers from the game are employers, with an estimated cost of just over $6 billion in lost productivity, according to Challenger Gray & Christmas, Inc.’s annual analysis. That blockbuster number is based in part on last year’s estimate that 17,500,000 employees will call out “sick” on the day after the game and another 11.1 million would show up at least an hour late, which combined will cost employers a total loss on Monday of $4.5 billion. Hard Stop! Aren’t your employees going to be watching the game on the couch on Sunday night and then 8 hours later get up on Monday morning, put on their slippers and robes, and go back to work on the same couch? How can they be absent or late for that? Nothing in this strange, never-ending joint year-202021 surprises us. But if there was ever a time when we all could use the day after the Super Bowl to be that national holiday, Smunday that Kraft-Heinz proposed a few years ago, it is in the midst of this 202021 morass.

We know what you’re saying: “Mark and Bill what accounts for the rest of the big anticipated loss?” Glad you asked. Challenger Gray estimates that if the number of employees expected to watch the game spent just 10 minutes a day last week chatting about it, creating office pools (the ones we tell you every year are illegal) or just reading about the game during work hours, that lost productivity would cost employers another $1.6 billion. But with so many people working remotely and those who are on site not being allowed to congregate in breakrooms or get within 6 feet of each other, who is talking to who about the game at the office? Poor Bob from Accounting has been walking around the house all week in his fuzzy football-shaped slippers and Joe Namath jersey trying to find someone to give him $5 for his football pool. So far the dog has 10 boxes.

What’s most interesting about Challenger’s lost productivity prediction this year is that it’s higher than last year’s by about a full billion dollars. How does that make any sense when, because of the pandemic, there are at least 9 million fewer employees this year than last? Given our propensities for math, we might need Bob from Accounting and his dog to help with this one but we think we’ve got the answer. The average hourly wage from the prior analysis was $28.32 and in this year’s $29.81. Challenger also predicts that while about 98 million watched the game last year, there will likely be more than 114 million of us shut-ins with nowhere to go and nothing else to do watching Super Bowl LV (that’s 55 if you don’t speak Roman).

Our biggest pre-game challenge was trying to convince Bob from Accounting who was performing at the half-time show. When he asked, hey Bill and Mark, who’s performing at halftime, we said, The Weeknd. He said, I didn’t ask you when the game is, I know it’s on the weekend, I asked who’s performing. We said, The Weeknd! He said, who not when. You know how the rest of this goes and if you don’t, please don’t tell us. It’ll make us feel like Tom Brady get sacked.