Anyone Have a Clue What To Do If Some Of Your Employees Are Vaccinated and Some Are Not? 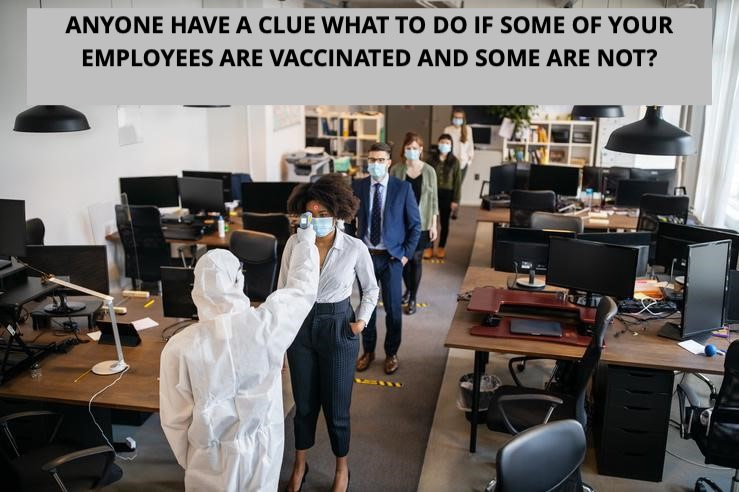 EMPLOYEES ARE VACCINATED AND SOME ARE NOT?

After more than a year, we finally figured out what CDC stands for and it’s not what you think. The agency that has been guiding employers through the pandemic wants you to think that its well-known acronym stands for Centers for Disease Control. Not true. We’ve discovered it really means, Change Directions Constantly. And that is exactly what it’s been doing.

As more employees are getting a shot or two in the arm, employers are trying to figure out what workplace policies should be in place for at least a semi-vaccinated workforce. You already know from our Christmas card to you that employers can legally require employees to be vaccinated as a condition of employment with exceptions for medical and religious reasons, or at least that’s what the EEOC says. But whether required or not, at least 60% of your workforce will likely be vaccinated by the summer.

In early February, CDC told us that we are considered “fully vaccinated” 2 weeks after our second dose (or the single J&J scary version) and within 3 months of that last shot. We ingenious lawyers interpreted that to mean that after 3 months, all bets were off and back to hiding in the basement. On March 8, CDC issued new guidance dropping the 3 months, but stating that even if in close contact with someone known to have the virus, there was no need to quarantine. On March 23, our indecisive science geeks pals further tweaked that guidance, but confirmed that exposure to a known case 2 weeks after the last dose and it’s back to business as usual. So if Bob from Accounting tests positive on Monday, and on Tuesday you drop off your tax returns for him to do while he’s in the hospital and he sneezes on you, no worries, go back to work. But in that same late March guidance, CDC reiterated that if you traveled domestically, even by car, you needed to follow the 10 day quarantine rules. Only 9 days later though, on April 2, the agency that Changes Direction Constantly, did it again and dropped the domestic travel quarantine rules for the vaccinated, just in time for Spring Break and summer vacations. So now, if Bob is sitting next to you on the plane and sneezes his viral load on you, good news, you can go to work the next day. This really is excellent news for employers.

If you want to get ahead of the summer rush, now is a good time to develop and publicize your travel policy. In recent months, we’ve heard from our clients that employees wanted to travel out of state for a week-long vacation, which really meant 2 weeks out due to quarantine. For many employers, that is unacceptable. Now that post domestic travel quarantine is no longer recommended for the fully vaccinated, you can be more flexible—that is, if you want. Remember that much of this is guidance and you can still choose to require employees to test and/or quarantine before returning to work. And keep in mind that the 10-day quarantine guidance has not changed for the unvaccinated who travel domestically and for anyone who travels internationally. What this means is that you likely need distinct policies for the vaccinated and the unvaccinated. This is among the reasons that mandating a fully vaccinated workforce might be at least more convenient, if not just safer. A late March Society of Human Resources survey found that 52% of employees favor their employer requiring the vaccine as a condition of employment, although the results varied significantly by generation.

There may be other issues that arise from having an immuno-diverse workforce. We just made up that term by the way. Look for our Immuno-Diversity Training coming soon to a Zoominar near you. Those who are unvaccinated by choice or due to medical or religious reasons might resent the dual travel policies and other such restrictions an employer imposes. Similarly, vaccinated co-workers might not want to be around those who are not vaccinated, resulting in a whole segregation kind of thing going on. Hopefully, many of you are old enough to remember the smoking section of restaurants and yes, even on planes (where it was absolutely useless).  It’s not inconceivable to see that concept re-emerge though in those public settings and even in typical office spaces. In fact, on April 1, the Miami Heat NBA team designated two sections of its arena as “vaccinated only.” Kind of ironic that a Florida team is the first to implement that kind of safety measure. Next thing you know MLB’s Texas Rangers will be doing temperature checks at the turnstiles.

Speaking of policies, one thing that CDC have not wavered on is that even after employees are vaccinated, the office protocols requiring wearing masks, wiping down stuff, using hand sanitizer, blah, blah, blah must continue. Among the reasons is that nobody said that the vaccine is a Get Out of Jail Free Card. So far, it’s undisputed that even the fully vaccinated can still carry the virus. If some employees are vaccinated and others are not, the virus can still spread. We know it’s so 2020 to talk about OSHA, but remember back then we told you about that law’s General Duty Clause, which requires employers to keep employees free from recognized hazards that are causing or are likely to cause death or serious physical harm. Yeah, that hasn’t changed. OSHA has already said that keeping the protocols in place is required, and may likely even consider a designated unvaxed section of the office, as the threshold of satisfying the General Duty Clause.

Last week OSHA, flexed its enforcement muscle, fining a small tax prep firm $136,000 for banning masks in the offices. That’s right, banning. So even employees who wanted to wear a mask couldn’t because the owner believes that masks are a health hazard – an interesting and now expensive theory. But that’s in stark contrast to the roughly $15,000 in fines levied in September 2020 against a meat packing plant where 290 tested positive and 6 employees died, and a pork plant fined around $13,000 in June after 1,300 tested positive and 4 died. Remember, since late January, there’s been a new sheriff in town which may account for the fine inflation.

On March 12, 2021, OSHA announced a national emphasis program (not sure what the heck that means, but it sounds serious) with a focus on employers that put the health and safety of employees at risk by not implementing or enforcing CDC recommended safety protocols. If the tax people, with 6 employees in each of its 2 offices can get wacked for $136,000, these OSHA guys may really mean it this time. One thing is clear: continuing safety protocols for the vaccinated and unvaccinated must remain the norm for the foreseeable future.

Although we cannot predict what the agency that Changes Direction Constantly has in store for us in the coming months, we are confident that your safety plan should allow, and in fact require, employees to wear masks while moving about in common areas–and probably even allow them to wash their hands once in a while.